You are here: Home / blog / Happy Hour for Ideas: aka A Pantsing Primer

Here’s the thing about ideas: they like to hang out. Given the opportunity, they’ll mix and mingle and sort themselves into compatible groups with the same finesse as college kids at a bar during happy hour.

The job of the pantser writer is to watch, observe, and let things take their course.

Take this bunny, for example: 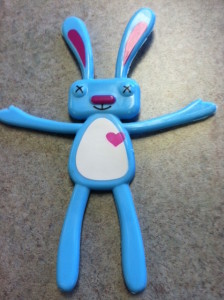 Mr. Bunny, along with a horde of bunny clones, showed up at the clinic where I work just before Easter. Somebody, somewhere, had made the decision that he would make a great toy to give to little kids to make them feel better after they got their shots.

The problem with this was clear to me and my co-workers. Mr. Bunny is obviously dead. Every cartoon in the world has made it clear that x eyes = dead. It seems Mr. Bunny died with love in his heart, but still. Dead. The last thing a four-year-old kid needs, after being held down on an exam table by a loving parent and a stranger while being poked with needles, is a dead bunny.

There was a lot of joking around with the bunnies. Hey, we clinic workers need comic relief as a defense against sickness, disaster, and last minute prescription requests and insurance authorizations. A rock band named The Road Kill Rabbits emerged from the bunny horde. I’m not even going to talk about the Necrorabbits.

Mr. Bunny was incomplete, however, until the person sitting beside me ended up with a small, empty box. It was the sort of box that opened while still attached on one side. Sort of like – a coffin. From there the fate of Mr. Bunny was obvious. A little black marker, some cotton balls, and a flower from the bouquet on the windowsill, and he was laid out in state. 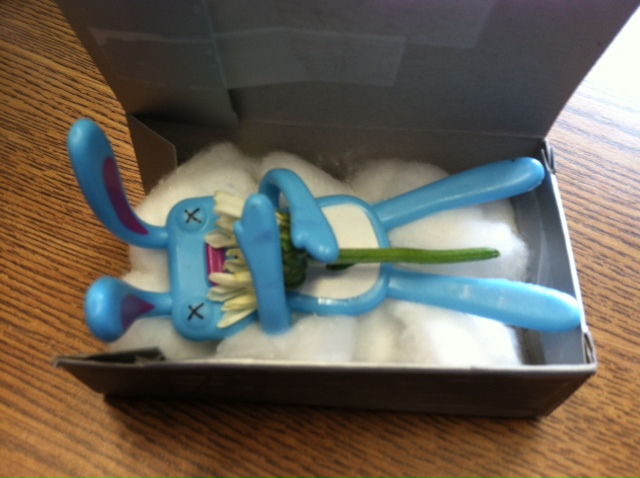 Mr. Bunny’s coffin then found it’s way onto our supervisor’s desk, because such things need to be shared.

This is how my pantser writing brain works. One idea connects with another idea which collides with a bit of current events or a fortuitous encounter with an interesting person, and the story is born.

Take DEAD BEFORE DYING, for example. A group of writers are hanging out on Twitter, talking about vampires. I ask, “What if vampires were as old as their age, instead of looking like eighteen year old hot bodies?” And then the idea of a geriatric vampire comes up. Which collides with an interest in nursing homes and a soap box rant about ageism, and before you know it there’s a book.

My current WIP started in much the same way, born of a conversation with my editor, a bicyclist on the side of the road, and some personal grief that needed expression. During the drive from Spokane to Colville, a whole slew of disparate elements joined up in my brain to form a cohesive story.

When I’m blocked, it’s because I’m not allowing this process to happen. Given free reign, bits and pieces of story hanging out in the subconscious will come together and form a Happy Hour in your brain. Go with it. Play a little. See where it takes you.

So maybe the result isn’t your next work of great literary fiction. But it might be. You never know. And if not? I can pretty much guarantee you’ll have some writing fun, so what’s to lose?