You are here: Home / blog / Distractions, Delays, and Deliberate Avoidance

Today I want to talk about priorities and productivity (apparently I also have a thing for alliteration today – sorry about that).

Some of you may be aware that here on the Pacific Coast of the United States, we had a huge fucking storm move through. It was bad. The James Household itself dodged a massive bullet, reaffirming my belief in the Almighty (there was even a rainbow over my house on the day of the worst predicted weather – I shit you not). 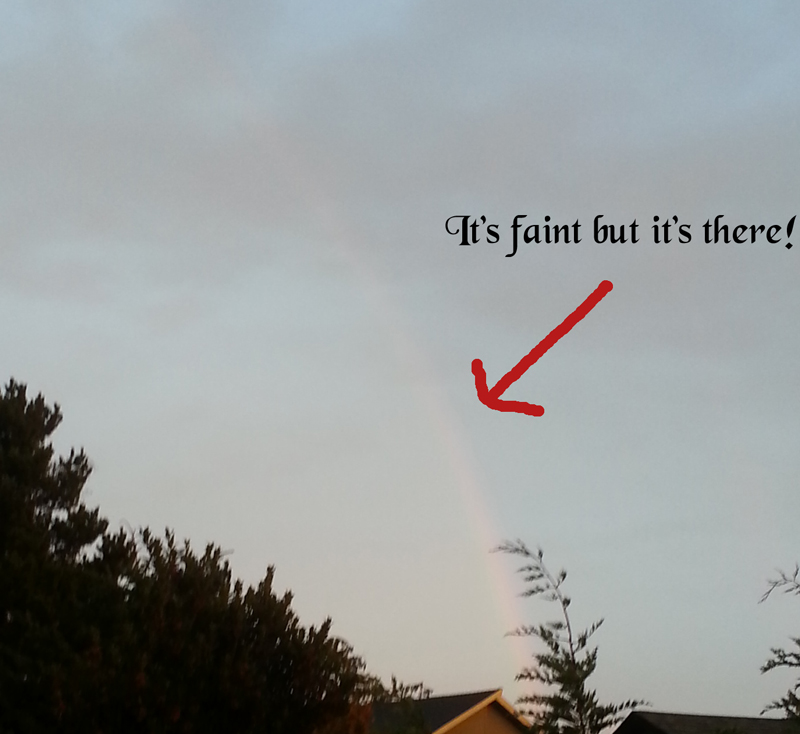 According to some ancient texts, a rainbow is a sign that the danger is over and peace and hope or some happy shiny shit.

It was pretty harrowing. At one point during a lull, He Who Enables My Crazy and I packed up the car with evacuation supplies and readied the animals in case an evacuation order was given like it was for Hurricane Matthew on the East Coast a couple weeks ago. Every news service and weather official had nothing but dire warnings to offer. We took them seriously and erred on the side of caution. Same principle as a condom – better to have it and not need it, than need it and not have it. So we were set to go if it came to that.

I have zero shame in admitting that during those four days of nightmarish weather, I didn’t get a word of writing down. I didn’t knit either. I didn’t do much of anything except do my best to keep my animals calm, check the house for damages, and keep hot water in the kettle (because TEA DAMN IT).

We played Uno and Yahtzee, kept up our morale with movies and video games when we had power (we were really, really lucky in that we only lost it once for about an hour). We even ventured out of the house during a long lull to grab some more battery-operated lights, pet treats, and Cheetos. Writing was not even on the list of my priorities last week.

That’s not to say I didn’t think about my stories and characters and potential plot points. I had the desire to write. I just didn’t have the focus or energy to act on that desire.

While most writers I know devote some portion of their daily life to their craft, and a lot of writing advice you’ll hear includes “write every day,” that’s not always possible, and for some, not necessary. The point of writing every day is to develop productive habits and encourage consistency, because if you’re going to go pro with your writing, you need those things in order to make deadline. The whole point of NaNoWriMo (*ahem* for those participating, you have exactly two weeks to get your ducks in a row) is to develop those habits and make a daily wordcount goal. It’s to teach you organizational and time management skills and promote productivity rather than encourage you to create, though that’s a nice benefit. (We have already discussed NOT SUBMITTING YOUR NANO OPUS TO AN AGENT THE FIRST WEEK OF DECEMBER. DO NOT DO THIS.)

In addition to random shit life throws at you, not everyone has the time or energy to write daily. Some have erratic habits – not always writing at the same time of day or even same number of days a week. Your schedule isn’t important – your productivity is. Your consistency is. As long as you consistently produce, you’re fine*. If you get your wordcount goal for the week done in a marathon session, that’s okay. If you only plug 100 words a day into your WIP, that’s okay too. The most important thing is that you write (to a reasonable, reachable goal, no matter how low. 1000 words a week is better than zero words a week). How you do it is your business.

*By “consistently produce” I mean reliability – this does not mean you churn out 100 words, read them, delete them for whatever reason, then don’t pick up the WIP again for six months. I mean some sort of schedule that works for you, even if that’s Monday morning, Wednesday evening, and Saturday afternoon. It’s not a regular schedule, but it’s consistent/what works for you. Writers write.

Now I need to get going. While the big huge DANGER WILL ROBINSON storm is over, there are still thunderstorms predicted for today, and I should get off the computer.