You are here: Home / blog / Dreams, desperation and Interesting Times

When I was young I had two career ambitions: writer and friendly werewolf. I put the writer thing down to watching my Dad tap away at his ancient blue metal typewriter, and later at our then high tech Apple II. The ambition to write has come and gone as I’ve gotten older, but it’s always come back no matter which flight of fancy my other ambitions decided to take.

I wish I could pin down exactly why I wanted to be a writer, and a fiction writer specifically. I love making things up, I love creating things other people enjoy and I also love reading. I love reading so much I used to sneak a torch into my room when I was little so I could read at night after my parents had switched my lights out.

There was another reason too, at least there was up until this year: I never thought I’d find a job I enjoyed. Being a professional writer felt like a way to escape a lifetime of working at jobs I hated.

I took a year off last year to write a novel, and it was as awesome as I hoped it would be. I finished it, edited it and had it graded by people much smarter than I am. I got a really good grade and praise that made my ego purr like a gigantic cat. 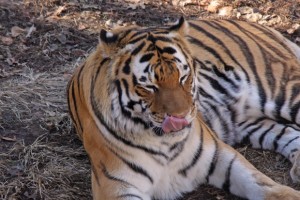 Then I completely failed to do anything with it.

I certainly planned to, but I didn’t pull the trigger despite lots of excellent advice from the likes of Julie Butcher (who is so awesome the universe is lucky to have her). I didn’t think it was fear at first, I certainly didn’t feel afraid, but I just couldn’t find the energy or interest to try to find an agent.

Then I got a job I really wanted writing for radio. I didn’t think I was going to get it. The team of people I joined turned out to be a bunch of scurrilous reprobates in the best possible way, and I started to look forward to going to work for the first time in my life. In the back of my mind I honestly considered giving away my writing dream…after all I was writing for a living, and I had a webcomic going on the side, wasn’t that enough?

I thought maybe it was.

Kerry Schafer has already written here about Sir Terry, and I made a post about how much he meant to me on my webcomic page, so I won’t wax lyrical here. It’s enough to say it made me think about why I started writing in the first place.

I went back and read the first Discworld book I found in my high school library: Interesting Times. I remembered how much I loved it, and how much I had wanted to write something just as good as Terry Pratchett’s work.

In that moment I realized that the reason I wasn’t sending my novel out wasn’t that I was afraid of rejection, I just didn’t want to give up the dream I had about writing. In my head I send out the book, someone loves it, publishes it and then drives a dump truck full of money up to my house and hands me the keys. I would never have to work a dull, frustrating job again. I couldn’t let go of that dream even though I knew the painful truth about the truck full of money…

When Sir Terry died a different motivation crept in to fill the space. I wish I could say it crashed into place all at once, but it settled in slowly, gently. I barely even knew it was there until I started writing this.

In fact it’s not a new motivation at all, but an old one learned on my Dad’s typewriter. 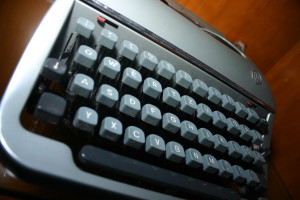 It’s amazing what you can find pictures of on the Internet.

I’ve said before that writing is fun, and it is, even when it’s awful, but I never really felt it. That desperation to escape the working life I feared always tainted whatever I was doing with an edge of fear and ambition. I felt like I HAD to write as much as I wanted to write. And now that I don’t feel that way…I want to write because writing is fun. Really, truly fun.

Writers talk a lot about persistence, about fighting through towards your dream, and sometimes you are going to have to fight. Sometimes editing is going to feel like trying to eat broken glass.

But I like to think that we all started writing at first because we wanted to, because it was fun to make up characters and then have monsters chase those characters up trees.

So many people quit because they forget that sense of fun. I almost did.

We set ourselves goals and deadlines and dream about what we’ll do with the royalty checks we’ll get when our stories are made into movies. We get jealous of other writers’ success and worry we’ll never find the agent/publisher/audience of our dreams. We ask other writers how they stay motivated.

I can’t answer for any other writers, but I can tell you why I started writing again properly, and it’s because I rediscovered that writing was a blast. If you’re struggling with motivation, try going back to your favourite book. The one that made you think you wanted to write something of your own. Go looking for the reason you started and see if that helps.

I don’t know how long this new motivation will last, I hope it’ll be forever. I guess if the writing thing doesn’t work out I can always try being a friendly werewolf.

I’ll let you know how that goes.