You are here: Home / blog / Burning Down The House

No, not like that. I mean figuratively, like a phoenix bursts into flame only to be reborn from the ashes.

2015 is winding down, and so too is the ELEW. Our annual holiday hiatus starts next week, but we’ll be back in January with new posts for all your eviltry needs. For now, though, here is my final post for 2015.

I was thinking of doing something like a year-end wrap-up post, but everyone does that, and let’s be honest here: most of my posts this year were recycled for one reason or another. Mostly to do with being insanely busy. The ELEW even took an unprecedented summer hiatus because Stuff and Things were happening to our various members all at the same time and we needed the breathing room, so there’s not a whole lot to wrap-up here.

Instead I’ll talk about starting over. You know…New Year Coming Up and all. It’s tough, it sucks, but it happens. Ask any author you know about their trunk novel. Go on. Ask. All writers have one, and if they say they don’t, they’re totally lying or deluding themselves. Sometimes trunk novels come from an idea that went nowhere, or wasn’t able to be developed for one reason or other, or just isn’t ready to be written yet for one reason or other. (Yes, this happens.)

And sometimes…just sometimes…you have to set fire to the whole thing and burn it to the ground and start over from the scorched earth up (or down, if you’re into pools or basement/ground-dwelling). 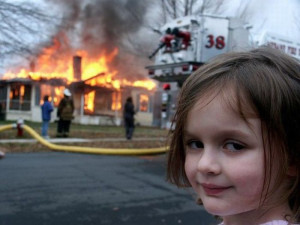 Sometimes things can be saved. Sometimes the bones are still good. Sometimes, though, you just have to call it and build another place. Mourn your loss (because it’s painful) and start over. People do it every day in their real lives. You can do it with fictional ones.

It’s okay to take a breather, like the ELEW did this summer, and reevaluate your situation and your goals. The well needs refreshing every now and then. Hell, I took a five-year break from writing once (and I didn’t realize I was doing it at the time – I just didn’t write anymore), and I really thought I was done with that part of my life, but one day it grabbed me by the throat again and wouldn’t let go. I wrote every night for weeks, pounding out a rough draft. It was glorious. Sometimes destruction and devastation makes room for new things to grow, like wildfires. They can do a shit-load of damage, but they can also revitalize an area that was overgrown and dangerous.

Make of that profundity what you will.

Enjoy the rest of your year.