You are here: Home / blog / I’m up all night to get stabby: Knives and knife fighting for writers 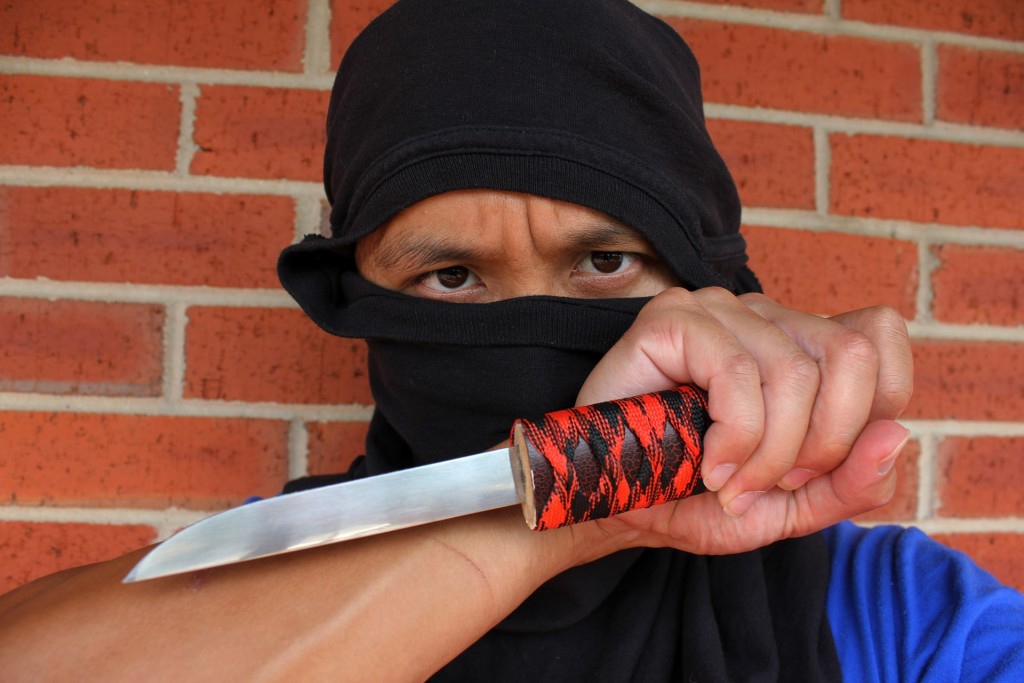 This isn’t a joke, this is a nightmare…actually to be fair the hood is pretty funny. The knife? NOT SO MUCH.

In real life knives are terrifying, life destroying weapons. At very close range they’re a match for a gun, and even experienced fighters can be undone by an amateur wielding a knife, let alone an expert. I think it’s important that we as writers impart a little consequence to the violence we put on the page. A great fight scene should be fun, but if the story you’re writing has life or death stakes then a knife should be seen as a real threat with real consequences. Even characters with super powers or high level martial arts should be wary of taking on a blade at close range, and if the person wielding it has any clue whatsoever about how to fight with a knife, then they should get cut or stabbed unless there’s a very good reason for them not to.

Obviously world destroyer level heroes and villains are exempt from this, but any character that’s still more or less mortal should be very nervous about the flash of a blade.

Speaking of which, in my experience as a bouncer, if someone showed you a knife they were doing so to intimidate you. If someone really wanted to stab someone else you wouldn’t know until someone else was bleeding. If a knifer is looking to kill your protagonists then the attack should come out of nowhere, more an assassination attempt than a mugging, rather than flashing the blade first…after all, why should the bad guys give your character a chance?

Another thing to bear in mind is very few knife attacks are traditional one shot stabs or slashes. The most common attack is called the sewing machine and it’s just about impossible to stop unless you are very good and very lucky. The assailant just grabs the back of your shirt/head and repeatedly stabs up into your abdomen. Vicious, repeated stabs.

Even if you can disable the knifer, chances are you (and by you I mean your protagonist, I really hope you don’t get stabbed) are going to be injured, maybe badly. This can add a great wrinkle where you can show your character’s badassery (they took out a knife wielding assailant!) and the consequences of violence (and they got repeatedly stabbed and now need medical attention).