Another year has come and gone, and it’s time once again for the Evil League of Evil Writers to celebrate its anniversary! Today we celebrate FIVE years of infernal mayhem, and in keeping with tradition, we command you to celebrate with us!

For those just joining us here at the ELEW, when we interview someone, we ask a series of Evil Questions, then offer readers a chance to win a creative work of their choice by that interviewee. Our anniversary interviews have a little something special, though – we also bestow upon them canonization at the end of the interview. This year, however…we have something extra special. Five years is a milestone, and our usual canonization has been…altered.

This year we have a titan author bestowing his awesome upon us. I give you none other than the long shot author himself – JIM BUTCHER! 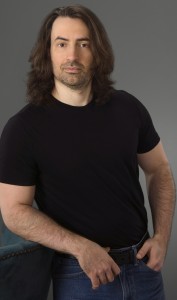 Don’t know who Jim is? Shame on you!

It sounds so tame when it’s all laid out like that. I assure you…Jim is much, much more than the sum of his backlist. He is evil to the molecular level, and we are beyond thrilled to have him with us today.

Welcome to the Evil League of Evil Writers, Jim!

ELEW: Let’s start things off right: What’s your zombie survival plan?
JB: Well. Trips to the firing range have shown me that between me and my fiancé, come the zombie apocalypse, I get the machete. I have one of those face shield things in my workroom, so I’ll bring that. Then it’s about me going all Conan while she does the Annie Oakley thing.

ELEW: If your zombie survival plan could involve taking one of your characters for help, who would you choose to fight zombies with?
JB: Most of my characters would start the killing with ME. I mean, seriously, I am a sadist to those people. I might need to borrow someone else’s character. Maybe Laurell would loan me Anita Blake, if I asked politely.

ELEW: Our website is dedicated to keeping writers from being douchebags, so I’d like to ask you what you feel would be the requisites for a successful writer’s group/beta reader/crit partner?
JB: The absolute premium trait in a reader is someone who is enthusiastic about your work, someone who feels genuine pleasure when they get to read something new you’ve written. Nerdthusiasm is an unlimited energy source.

ELEW: Writers tend to be a little on the physically unhealthy side, what with the constant sitting, and the mentally unhealthy side, what with the suffering for their art. You’ve been spending some time in the Realm of Sweat and Tears yourself of late. What are your top writer self-care tips?
JB: Sometimes you have to go outside and talk to other people. I know, I know, it’s weird and awkward and intimidating, but you should go outside at least a little every day, and talk to someone else at least a little every day. Then you can scuttle back to the safety of your writing area and go back into the worlds inside your head with a clear conscience, having contributed to society.

ELEW: I’m not going to ask you the typical “how did you get published” question. We’re more interested in the answer to “how did you know you wanted to write?” Was it always something you wanted to do?
JB: Well. I was badly disappointed in a followup to one of my favorite fantasy series, and I looked at it and scowled and said, “What was he thinking? I could have done it better than that.” And then I thought, “Well, Jim, you can’t be a blowhard rageboy* like that unless you’re willing to put your money where your mouth is. So I guess you’d better write a book to prove it.” As it turns out, it’s harder than it looks.

ELEW: Which of your characters is most evil and why? (Not necessarily “mustache-twirling” evil.)
JB: It’s hard for me to judge relative amounts of evil, because evil isn’t actually a thing. Evil is a lack of something. It’s a lack of goodness, a lack of compassion, a lack of humanity. There’s just a hole where all of those good things should be.

Marcone is terrifying because he lacks anything like regret. He’s going to accomplish what he means to accomplish, and if he has to murder half the world to get there, so be it. He’ll do it humanely and efficiently, but he’ll do it. Nicodemus probably has the most obvious gaping hole where his humanity should go, and his long term goal is the most devastating I was able to imagine. Cavendish, in the new series, is so isolated from other human beings that she might as well be a murderous alien creature. But probably the most terrifying to me, on a personal level, is Mab. Mab has zero compunctions about any action that supports her long term goals. She’s intelligent enough that she doesn’t do monstrous things on a regular basis, because generally that just isn’t smart in the long term—but she’ll do them without pausing to doubt, and she won’t lose an instant’s sleep over it.

ELEW: If you were a vampire from your Dresden series, what Court would you belong to?
JB: Well, at this point I’m creaky and getting stiffer but very strong. So I suppose it makes the most sense that I’d belong to the Black Court. 🙂

ELEW: What do you think was the most evil thing you have done to your readers? (i.e. a scene or cliffhanger you felt was particularly nefarious)
JB: Oh, the end of Changes, by far.**

ELEW: Which character of yours speaks to you the loudest? This can be either the most insistent character or the one that just wants things their own way all the time. Answer can be the same for both!
JB: Hard to say. They’re all pretty noisy in my head. Charity Carpenter is someone who is absolutely inflexible, so it’s sometimes been a challenge to fit her into the story in the way that I wanted. Murphy is terribly obstinate, of course. Bob is always smarting off about everything and I have to reel in his snark much of the time, lest he upstage everyone else in the scene with him.

ELEW: When discussing our own evil idols, the name Jim Butcher popped up as one we universally agreed is a writer of the evilest kind. Who is the evilest writer you can think of, one whose evil you aspire to yourself?
JB: Darth Whedon.

I have gotten some pretty strongly worded messages about the scene between Harry and Murphy in Skin Game. 🙂

ELEW: You’ve had a bad day and head to YouTube to watch adorable animal videos. Kittens, puppies, pandas, or other: which do you pick first? This has absolutely zero effect on your evilness, of course, unless you pick human babies.
JB: Puppies. Definitely puppies. Though when I’ve had a bad day I generally log on to a video game where I can wreck my fellow human beings in a testosterone-fueled berserkergang.

ELEW: We’re all tempted at some point to snoflake out and act speshul when we shouldn’t. Have you ever given in? Can you share with us your own embarrassing speshul snoflake moment? We’ll kill the witnesses afterward, if you like.
JB: I have once abused my author superpowers, by cutting to the front of the line in the Battletech video game pods at DragonCon. It was kind of awesome. 🙂

ELEW: We’re going to give a random commenter a Jim Butcher book of their choice. Pretending they’re a JB virgin, which would you recommend for them?
JB: Dead Beat, in the Dresden Files. I wrote it to be a second entry point to the series, and I was starting to hit my stride as a writer at that point. Plus that book had a couple of my favorite moments in the series so far. 🙂

*I am so stealing this phrase from now on. – DJ
** Agreed. I admit to personal horror, possibly a strangled sound of actual pain, and then a stream of cursing. – DJ

Thank you, Jim, for your awesome!

As said above, each year on the ELEW’s anniversary, our Evil Interviewee is canonized. Our 5th anniversary guest has altered the deal, and we pray he does not alter it any further.

This year the ELEW is very proud to acknowledge the sovereignty of DARTH MCBROODYPANTS!

If you would like to declare your allegiance and swear fealty to our very own Sith Lord [WE HAVE OUR OWN SITH LORD I AM FILLED WITH EVIL GLEE YOU GUYS A SITH LORD HOW COOL IS THAT?! – DJ], he can be found via the following:

ETA: The giveaway portion of this interview is now over! Congratulations to lucky winner Susan!

Stay tuned the rest of the month for fantastic evil guests, more giveaways, shiny things, and as always, loads of up-to-no-goodness!

Enter to win some extra goodies!