You are here: Home / blog / Eviltry – A Retrospective

During this, our fifth anniversary month, you’re going to see a lot of posts from our members about the road we’ve traveled to get here. No, not here, “published.” Here to this point. To making it five years.

Let’s face it – five years online is a hell of a thing. A lot of websites don’t make it this far, and writer’s groups are even less cohesive. Keeping our shit together for five whole years is an epic feat, and it’s due in no small part to everyone involved here, both past and present.

As this is a retrospective, let me walk you through our various incarnations.

Way, way back in 2009, Skyla Dawn Cameron and I kicked around the idea of creating a “real” writer’s group – one that took no shit, pulled no punches, and wasn’t an ass-kissing circle. A group of writers who valued brutal honesty over pats on the head. A group for writers who were serious about their craft, about being a better writer, about real, commercial publication instead of submitting their shitty self-insertion fanfic to an online retailer for $0.99. We created a private Facebook group and invited a few founding members and thought no more of it.

As time passed, it became apparent that we all wanted to do more. We wanted to go public with our articles and posts and advice and news we saw, and call people’s attention to shitty things going on in the writing world, not the least of which was shitty people doing shitty things to our friends. So, in 2011, Skyla created a little space of our own for us on her website. We hammered out a twice-monthly posting schedule for our members and thought no more of it.

Well, “thought no more of it” for a year or so. Things grew and it was thought best that we have our own space, so we moved over to Blogspot. There we hosted the Evil for Crestline and Evil For Julie fundraisers. Between the two, we raised over $17,000 in evil donations to their respective causes. That’s not too shabby for a small group of authors dedicated to the harsh reality of writing. (And these were just the public fundraisers – the ELEW gets up to a lot of no-goodness on our own. But you knew that, right?)

After the success of our various fundraisers and the subsequent uptick in traffic hitting our little corner of the Intarwebz (due in no small part to awesome guest interviews and others willing to give us their time), it was decided that we should have our own space. A real space of our own, not just a blogging platform with a few customizations. Things were hammered out and when the dust settled, we had forged the gorgeous website you’re reading right now. (Though everyone had a hand in its creation in some way, special thanks go to Skyla Dawn Cameron for the awesome build/graphics/general webmistressy things she rocks at, and Melinda Skye for our domain.)

As with any organization, there have been some trials and tribulations along the way. Moving house so often means sometimes things get left behind, broken, or messed up. We’ve had multiple changes of the guard since our inception, but our core has always remained strong. This isn’t to say there haven’t been more than a few times when the management has considering shuttering Hotel Eviltry, but something (usually readers – your comments and links back to us and finding us via your search results matter – don’t ever think they don’t!) has always managed to stave off our destruction.

So here we are, five years later. It’s been a long and sometimes bumpy road, but we’re still here. We hope be here another five years. And then another. Maybe another after that.

Right now, though, let’s just concentrate on getting through 2016. It’s only April and it’s already been a hell of a year for everyone.

You know what would make things suck less?

Free stuff. Shiny things. Head on over to the Giveaway Page and see what no goodness you can get up to. 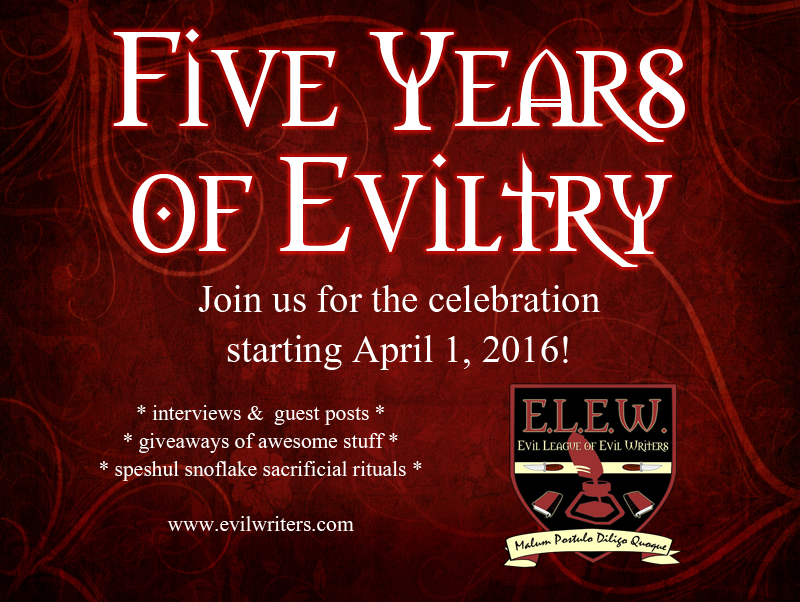 Thanks to everyone who makes the ELEW and Hotel Eviltry possible – members, guests, readers, fans, and viewers like you.