You are here: Home / blog / From the Archives: So You Have a Stalker

This post was originally available at our old ELEW site, February 2014. As it’s an important topic to revisit, I thought I’d repost it here with added updates.

Being a writer doesn’t necessarily mean you will have a stalker, nor does not being a writer mean you’re immune. But if you’re a. a woman, b. existing on the internet, and c. have any kind of platform at all, each increases the likelihood that you’ll end up with someone who will stalk, threaten, or harass you. (Again, this also happens to men; for the sake of simplicity, I am using female to be the default in this as statistically speaking women seem more likely to be stalked, but it is NOT gender-exclusive.) As a writer, this might be something you’ll have to face if you haven’t already.

First, what actually is stalking? Is it more than what we think of as trolling?

Stalking is a difficult term to define, and there are different legal definitions depending on where you live. But here’s a simple one used by various sources (including, I believe, the Violence Against Women Act):

“…purposely engaging in a course of conduct directed at a specific person that would cause a reasonable person to fear for his or her safety or the safety of others, or suffer substantial emotional distress.”

I have been stalked. Good friends of mine have been stalked (some even recently). Sometimes by an ex, sometimes by fan, sometimes by someone decidedly NOT a fan, sometimes attempting to get back at someone connected to the victim. Sometimes these messages are overtly threatening, both to the victim or the victim’s family. Other times they’re not, but they’re crossing a line any reasonable person would see when a person tries to insert his or herself in the victim’s life for some unknown gain. Every person is different and therefore every stalking case is different and will require a different approach to deal with it.

This blog post isn’t on the psychology of it–I’m not going to tell you what to do. This blog post also isn’t going to be about the legality of it; I am not giving legal advice. If you fear for your safety, phone the police. Right now. But because this is something a lot of writers deal with, I would like to offer some general suggestions. 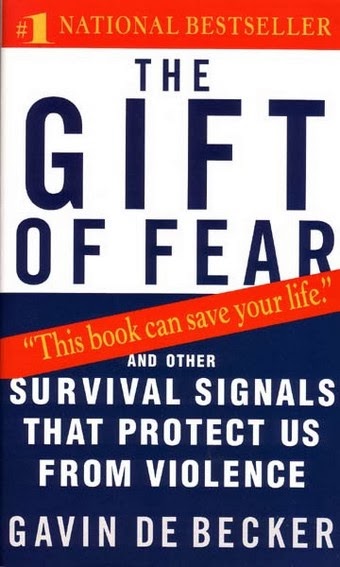 It’s Gavin de Becker’s The Gift of Fear. I hesitated for a long, long time because I saw an interview de Becker gave and a few of the comments he made about domestic violence bothered me enough to disregard everything else he said (Lilith Saintcrow touches upon it in her review here, and incidentally it was her support of the book that pushed me to eventually give it a try).

And then don’t just read it once. Read itevery year. I plan to, because despite having read it, societal conditioning still led me to ignore red flags and warning signals the last time I dealt with someone who made me uncomfortable, and the results could’ve been disastrous. As I reread it last summer, I felt like an idiot for not seeing things sooner.

Understanding the warning signals can help make you aware from the get-go who to be wary of and who to avoid, even in an online setting.

Look, I’m a union man’s daughter; I have it sewn right into my DNA that you keep records of everything, never throw anything out, and always have everything ready to back you up. When it comes to dealing with people online, you can never keep too many records.

Any message that makes you uncomfortable, or threatens you–anything at all–keep it. The messages on your blog? Maybe they’re from a troll, or maybe they’re from someone whose behavior is going to escalate. Regardless, don’t trash them. Block the IP address, keep the comment in moderation, take a screenshot. I know it can wear on you, especially for particularly heinous comments, but some people stalk their victims for years. This information could help narrow things down later if problems escalate and police become involved.

Also include emails. It can be very tempting to direct certain email straight to trash, but the person sending the email will have no idea you didn’t see it; all it does is help your own peace of mind. But ignorance is not bliss if you’re dealing with someone who could become dangerous and you might need to establish a pattern later. I use Gmail and it’s very simple to set up a filter and move incoming email into folders. I have a folder called “CrazyPants” and any email from a handful of people who either are prone to yell at me, harass me, or otherwise freak me out, go straight there. That way I have the messages saved but I don’t see them; if I choose to go looking at them, I’m able to mentally prepare myself before I go looking, rather than have them simply land in my inbox.

3. Never react right away and take care how you proceed.

The line of thinking is always “ignore the trolls.” And there is a logic to this as well when dealing with stalkers or someone possibly prone to violence; as de Becker says, each contact–even to say “stop contacting me”–buys you six more weeks of harassment. Sometimes, though, the opposite reaction is instinctual: to confront someone, to argue, to tell them to fuck off.  Sometimes restraining orders are helpful and at the very least provide a record; other times they can trigger violence in the perpetrator.

There is no right or wrong way to respond, and what you do must be carefully weighed depending on the circumstance. Sometimes hiding behind anonymity means shining a light on the stalker’s real name will send them scurrying back to the shadows to find another target; other times, it might enrage the stalker and increase the frequency and severity of their behavior. Be wary of one-size-fits-all suggestions for dealing with such a situation, and seek professional help whenever possible.

If asking someone to stop contacting you, you must have consequences written out should they go against your wishes. Often their goal is prolonged contact with you, so telling them flat out you will be handing over all correspondence to a third party and will never have contact with them again if they continue whatever behavior you’re asking them to stop can work…but only if you follow through. Idle threats like “I’ll call the police” aren’t effective if you don’t plan to follow through, because as soon as they realize you’re bluffing, their harassment will increase.

4. Utilize “Be On the Lookout” Alerts.

If you’re concerned at all for your safety, or even if someone is just raising red flags and make you uncomfortable, it is worth letting your friends and family know to watch out for this person.

There is a risk here that people will tell you you’re overreacting. There is also a risk with employers; three years ago, when I went to my employer about a stalker situation to request that they forward me any emails that might come, I was later told that the “concern” regarding my stalker was a reason for giving my job to someone else. This is bound to happen: people either won’t take you seriously or somehow blame you for what you’re going through.

Be cautious who you tell–you want support, first and foremost–but don’t keep it entirely to yourself. Often when a stalker finds his or her path to a target blocked, they’ll then go at it sideways. This can involve trying to get to her through her job, approaching her friends, etc. If you have suspicions about someone, carefully let people know to be on the lookout for this person, not to respond to him at all, and forward you any communications for your records.

5. Be aware that you will hit roadblocks.

Social networking sites are wonderful but they often provide places for predators to hide without punishment. Reporting an impersonation on Twitter requires you to send in a scan of your driver’s license, but getting Twitter to confirm whether or not, as part of their “we reserve the right to share parts of the complaint with the user you’re complaining about” bit, they’ll keep your personal info entirely confidential, is a bit of a challenge. Any site where membership and participation is free means user concerns are going to take a backseat to profitability from advertisers. This means a lot of these sites are not vested in protecting or supporting victims.

It doesn’t mean you have to leave Twitter, or Facebook, or whatever, but understand that aside from collecting evidence if harassed there, there might not be much you can do.

6. Watch what you put online.

When you register your domain name, pay the extra $5 a year to make your contact information private. Invest in a PO Box. Don’t include photos of your children or your home online. Don’t use real names when referencing your kids.

On Twitter in particular, it’s easy to feel like you’re chatting with a bunch of friends; in reality, it’s like standing on a stage with a microphone being completely unaware of who is listening to you. Just because the only people who respond are those you know or people who seem cool, you literally have no idea about everyone else paying attention. On Facebook, lock down the privacy on your personal page and ask family/friends not to tag you or your kids in their photos.

I had someone go through my photos and figure out roughly where I live despite the fact that I never show street signs or the names on storefronts. Be 100% certain before you post any personal details that you’re okay with them being out there and if you’re unsure, don’t take the risk. IT IS NOT YOUR FAULT IF YOU ARE STALKED. I am not victim-blaming. But it’s reasonable to be cautious about what personal information you share online as a public person.

I’m not just talking legal help here. Depending on the severity of your experiences with a stalker or harasser, it may cause anxiety, fear, and impact your day to day life. Living in a state where you are constantly scared for your own safety will wear on you and it’s important to seek treatment to ensure this person doesn’t rob you of any more of your life than he already has.

I sincerely hope you never have to face a situation like this, or that if you do, the perpetrator slinks back and leaves you alone afterward. But be calm, be prepared, and take steps to deal with the situation.

And kill the person in fiction. Because you’re a writer and that’s just what we do.