You are here: Home / blog / Writing fighting: Big and strong.

I read a lot of fiction and I see some tropes repeat themselves over and over (this isn’t even the first time I’ve said this).

One of the ones that crops up all the time is that of a small person beating up on a much larger, also skilled opponent because they’re faster or even more skilled than the person they’re up against. 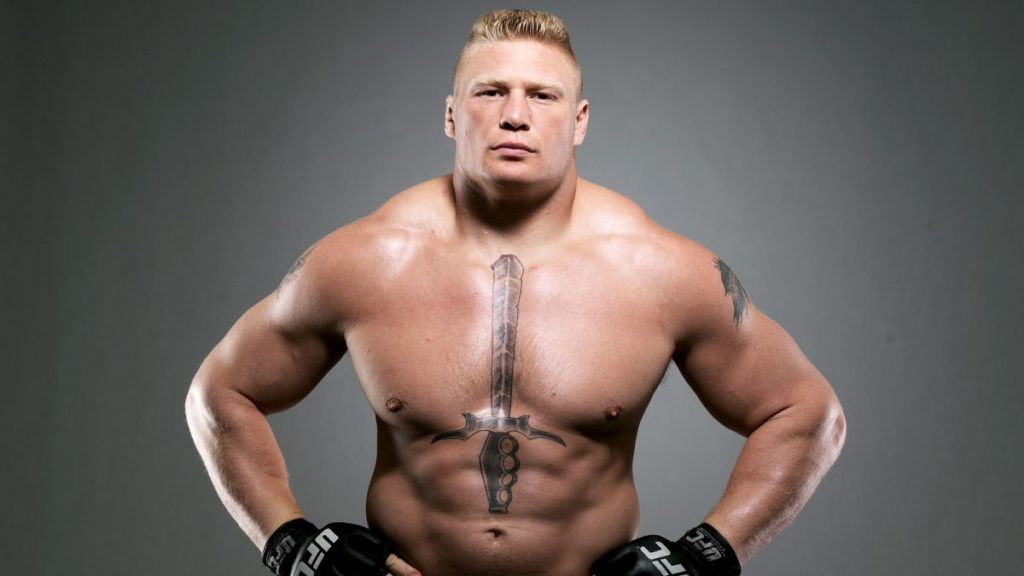 This is Brock Lesnar, a good example of strength, size and power all in one package. On the balance of probability I think that’s a sword he has tattooed on his chest.

It is absolutely possible for a small, strong, quick, skilled fighter to outmaneuver a bigger opponent. But it’s really, really difficult and if the big fighter knows how to use their weight and power properly then the skill gap between the two will have to be astronomical for the smaller fighter to win (barring super powers of course).

I’ve been both the big one and the small one and believe me it’s way better to be the bigger person.

I think this problem comes up because it’s assumed that skill is the deciding factor in any confrontation, where in reality it’s just one bit of the puzzle. The way I imagine it is very much like a simplified role playing game. This analogy is wrong, but it’s a half decent way to think about the way it works in real life.

In any fight you get three factors. Skill is one, emotional skills are a second and physical attributes the third. Imagine that each combatant has a number in each column, and when the fight starts all of those numbers get adding in together. Whoever has the bigger number is probably going to win. So if someone you fight has sixes across the board, and you have fives in two but a ten in one…you’re probably going to take the win.

Of course once you add in things like luck, weapons, multiple opponents and environmental factors the whole model falls to pieces but it’s a good way to get an idea of how bad things would be if came across someone twice your size and determined to stove in your skull. To beat them you’ve going to need to be better and meaner than they are.

I think this should be addressed in fiction. It’s fine for your protagonist (or antagonist) to win despite a size disadvantage, but the advantage given by mass and strength shouldn’t be ignored. Give your heroes a reason for winning beyond their combat skills.

And if they come across someone like Brock Lesnar above…a guy who’s big and strong and fast and far more skilled than most give him credit for then your heroes are going to need a really good reason.