Almost every story has conflict in it, and a surprising amount of that fictional conflict ends up being facey punchy type fighting. A lot of our characters either start out knowing how to beat the life out of their enemies, or they learn how over the course of the story.

It can be okay to just have your character know how to fight and not get into their specific style, but for my money I prefer to add in a little extra detail, so I thought I’d go through some of the world’s fighting styles and how they can be applied to your story if you’re so inclined.

Today’s style, Catch As Catch Can Wrestling, is a lesser known martial art that originated in Britain in the late 1800’s. It looks a lot like a collegiate wrestling and Brazilian Jiu Jitsu had an extremely angry baby, with both high and low amplitude throws being combined with some impressively nasty joint locks. 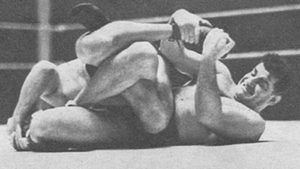 That crunching sound is the other guy’s knee…

The style was refined in the USA where carnival wrestlers borrowed and invented techniques wherever they could, and then challenged all comers to wrestling matches as part of the carnival’s general entertainment. Local toughs would fetch up against these wrestlers for the chance to win money, and often there was more than one big, strong local ready to try their luck, so the style developed submissions (think joint locks and chokes) to an extremely high degree, because why waste energy trying to pin an opponent when you can just break their legs.

Because of the high skill level of the wrestlers and the violence of the matches, catch wrestling (often known as just ‘catch’) became popular worldwide with wrestlers like The Great Gama from India, Mitsuyo Maeda from Japan (Maeda was instrumental in the development of BJJ and Mixed Martial Arts), getting into competition with American wrestlers like Frank Gotch, Lou Thesz and Ed Lewis. The wrestlers were legends in their own right, with spectacular (and brutal) techniques and incredible strength and fitness (if you’ve ever seen an old school comic book you’ll have seen ads for various wrestlers conditioning courses).

The Great Gama. The power of his ‘stache alone is enough to bring most men to tears.

Worked (fixed) matches slowly became the norm, and professional wrestlers went from being some of the most feared fighters on the planet to being jokes in less than fifty years. Catch wrestling all but died out, until the rise of the UFC in America and Pride in Japan. While early matches were dominated by Brazilian Jiu Jitsu fighters, a few notable proponents of old style catch wrestling like the Shamrock brothers, Kazushi Sakuraba and Josh Barnet started to stake their claim as worthy challengers and champions in no holds barred fighting (a term that originally came from Catch by the way).

So, after all that, how could you incorporate Catch into a story?

It’s still an unusual enough fighting style, even as a base for MMA, that it can help a character stand out. Their submissions have bled into other styles of combat, but at least for a time they were the biggest proponents of some of the nastier submissions like heel hooks (kiss your knees goodbye) and neck cranks. A traditionally trained Catch Wrestler will always look to end a fight quickly, they don’t focus on positional fighting nearly as much as other grapplers, not that they don’t know how, but catch wrestlers prefer to just rip off an opponent’s limb and walk off with it. 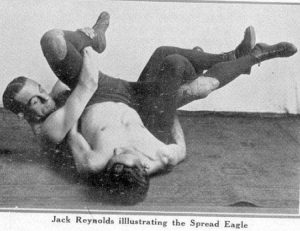 In BJJ we called this the banana split. No matter what you call it, what it means is the person on the receiving end is about to be sad.

They also don’t fight off their backs a lot. In Catch Wrestling you can lose if someone pins your shoulders to the ground, a layover from way back when someone forcing a soldier to their back had a great chance of stabbing that soldier to death with a dagger. This makes Catch Wrestlers far more aggressive fighters, and they’re usually looking to get on top of an opponent and stay there.

It does have some downsides. Super aggressive styles tend to favour dominant physical specimens, and Catch Wrestling is extremely tough on its practitioners. Also, that aggressiveness and preference for being on top can mean that Catch Wrestlers can struggle off their backs if they’re forced into protecting themselves. This is less of a problem these days as Catch Wrestlers have adapted their styles, but it could certainly be a good plot point if you wanted to use Catch as a

Also, like Jiu Jitsu and Judo, it takes time to get really good at it and ideally a character would have a super skilled teacher to guide them through the learning process.

Plus, one of the art’s greatest strengths is also its greatest weakness. Catch is ultimately a sport, whether it’s as its own thing or in MMA, and that means Catch Wrestlers don’t do a lot of training against weapons or multiple attackers. That sport training means Catch Wrestlers are monsters in a hand to hand fight as they train for real against other people who are really resisting them but they might struggle against a blade…

To be fair everyone struggles against a blade, but it’s still something to consider for your story.

If you want to read more on Catch Wrestling, then check out the documentary Catch: The hold not taken and the book Say Uncle! By Jake Shannon. It’s an interesting style of fighting, still rare in the modern era and distinct from other ways of fighting.

I hope this has been helpful!