How far do we need to go when researching characters for a book? Obviously much relies on our imagination, but sometimes when you really want to get it right, you need to get up close and personal. I have an actor friend who was playing a Tiger in the play ‘The Lady or The Tiger’, and as he had no experience with cats and really wanted to wow the audience, he spent afternoons at my house following around my cat. Like literally lying on the floor with her and watching her every move and studying her. So when the play rolled around and I saw my friend on stage, all done up in tiger-striped body paint and licking his fist then rubbing it over his head and so on, I died laughing, and so did the audience, because he nailed it.

Most times if you’ve reached the age of actually writing and publishing a book, you’ve got plenty of life experience to draw on. But when it comes to certain characters, children for instance, you need to be careful. I write about kids a lot and trust me, readers will be quick to call you out if your six-year-old speaks like a forty-year-old aristocrat, or on the other hand, like a two-year old sucking his thumb and using baby talk. It’s cases like these where pulling from real life, even the dialogue of real people, comes in handy. I used to avoid this because it felt like cheating somehow. But there are so many interviews with acclaimed authors through history who will unabashedly admit to doing just this, that a character in their book is based almost entirely on someone they know and their conversations and experiences.

So I like to listen to kids talk and watch their interactions, and pull some actual dialogue from what I’ve absorbed. Even THEN you might have readers complaining that your child character is too contrived, because everyone has their own perceptions of how children act and speak. And its true, some kids DO speak like forty-year-old aristocrats, and it’s hilarious. They absorb and mimic the adults around them and so on. But if you pull from real lives and experiences that tickle you, at least YOU as the author know it’s not contrived, that it’s real, however it translates. Though I highly recommend observing your own children or the children you already know rather than scoping out playgrounds because…you know, that could appear creepy.

But if you ever find yourself needing to follow a cat around, mine is a very cooperative muse and will work for tuna flakes. Though expect to get some kitty stink-eye, as the entire time my friend was researching her she was looking at him like he must have serious issues. When she wasn’t expertly feigning aloofness–a detail my friend also managed to work into his stage character. 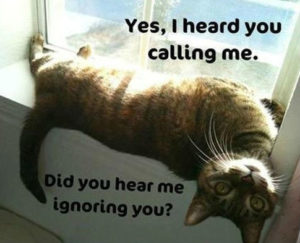 So look, listen, observe real people. And pillage what you need, short of slander or plagiarism of course. But there’s nothing like the real thing when it comes to creating fake people.