You are here: Home / blog / Nothing beats experience

This might not seem like a big deal to anyone else, but I’m a Kiwi, a person from New Zealand. I am a long, long way from home.

I went and shot some guns today, with the guidance of Julie Butcher’s eldest daughter, because I’ve barely ever fired a gun before (New Zealand has very restrictive gun laws) and they feature in my writing a lot. 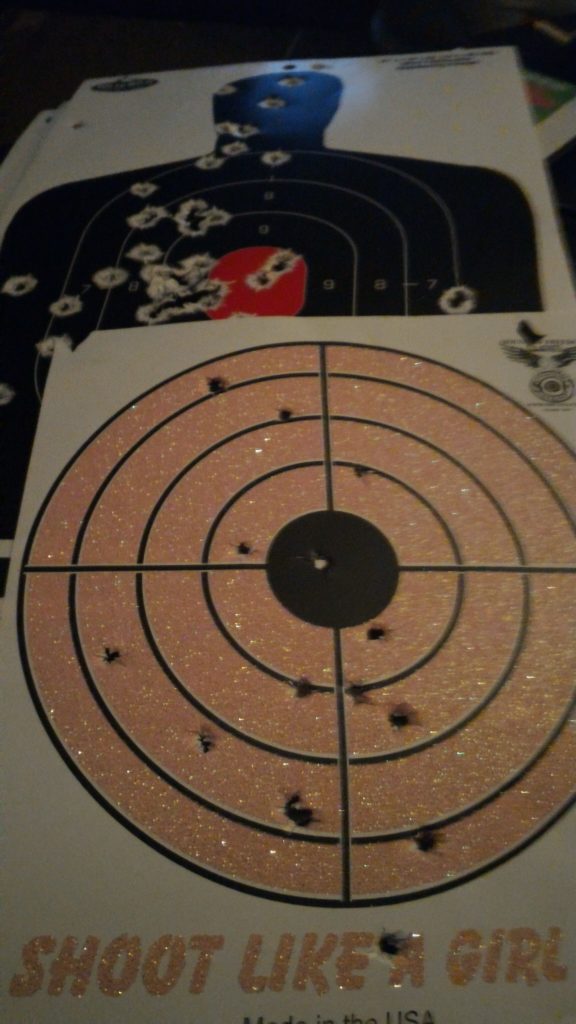 Is the Shoot Like A Girl target mine? Yes it is.

I’ve read up on firearms before but I learned a lot by actually shooting. For one thing guns are awe inspiringly loud. Even through hearing protection a .45 sounds like a shipping container being dropped onto concrete next to your face.

Secondly while shooting accurately one shot at a time under no pressure isn’t that hard, firing multiple shots rapidly kicks your accuracy right in the beanbag.

During accurately multiple time while someone shoots back would be all but impossible without an incredible. amount of training.

I could have found all of this through research, but knowing it for real, having felt the gun kick back is differnt. Trying out three shots centre mass and the Mozambique Drill and feeling how much recoil effects follow up shots has given me a different perspective.

This is going to give my future gun scenes a different feel. As limited as it is, the new experience on the gun range gave me subtle information that’s tough to get through book learning. Obviously I can’t speak to what it’s like to exchange gunfire, and I’m not about to go and get into a firefight (I doubt anyone will be prepared to stop shooting so I can take notes).

The same is true of fighting. I don’t recommend picking real fights, but hard sparring, if you can do it, can give you a taste of how trading blows works. You won’t get as good a feel for Paris from a book as you would by standing on top of the Eiffel tower.

Things you experience for real inform your writing in lots of little ways. It applies to skills, places, people and situations. The more you can see for real, the better.

And you can claim it all back on taxes as research. So go do things, do awesome things, then write about them.