You are here: Home / blog / A common enemy

Brace yourselves, this is a weird one.

I’ve been thinking a lot about mooks. The anonymous, often faceless masses of low level bad guys a protagonist plows through on their way to find the real villain. 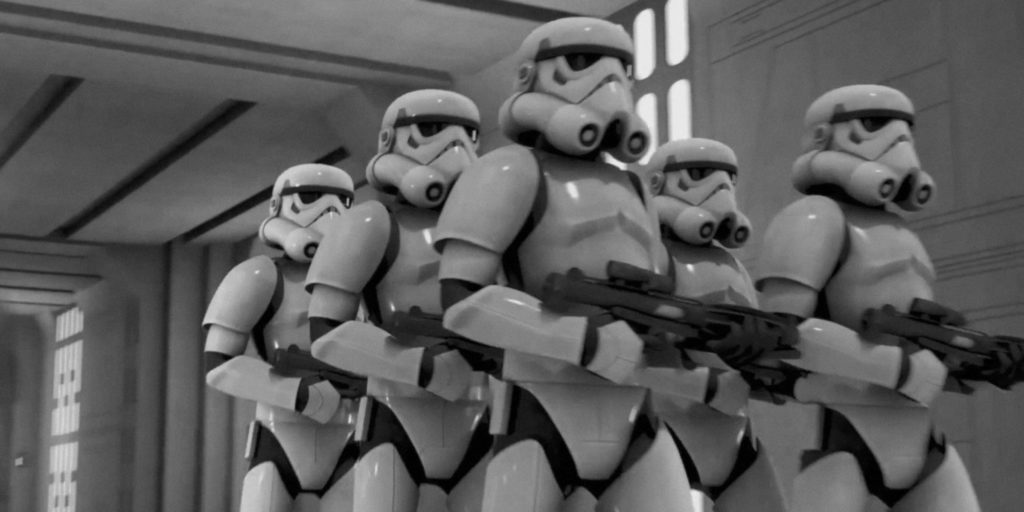 These guys, for example.

Including mooks is a good choice for movies, because time tends to be limited and no one needs to hear about angry tattooed man seven’s backstory. He’s there entirely as an indicator as to how awesome the protagonist(s) are, and they get to paint a picture of their own power in his blood and bone.

But in real life mooks aren’t a thing, and if you want to put a tinge of reality into your writing it’s worth bearing that in mind. Literally everyone has a story, and it helps if you know the ones behind your mooks even if they’re destined to die within a few moments of being introduced, that knowledge can help you add little details about them that makes the violence in your story carry more weight and that’s a good thing. Your protagonists’ violence should have consequences, either for them or those around them, and your reader should know, even subconsciously, that the people the heroes kill or maim might be bad people but they’re still people.

I’m sure you’ve heard the cliche “everyone has a story”, but it is actually true, even if the story is something like “Steve was a minor league asshole from the time he was five until eventually he got really good at hiding being an asshole and then he picked up a job being a major league asshole and eventually that job killed him.” You don’t need to know all of Steve’s backstory to write him convincingly…just put a bit of an explanation into each bit and it becomes something like this:

“Steve was pretty normal until he turned five, then a head injury caused a major personality change. He became impulsive, violent, even cruel. As he bounced from high school to high school he learned to mask those instincts until he was able to join the army. He was eventually discharged after ‘an incident’ and found work as a mercenary. That job brought him into immediate conflict with a person who possessed abilities far outside the norm and that person pulled Steve apart at the seams.”

So, now we have a tiny bit of a story for Steve and when we put him in to get wrecked by our protagonist, it gives us little bits of flavor to add to his character. His way of looking, moving or acting when confronted can tell your reader a lot about the story above. Of course this is a bit of an extreme example, but the method really works.

It also works as a great way to generate character and story ideas. Make up a quick story about some hero (TM) ripping their way through a squad of what would normally be bad people. Pick one of the bad people and tell their story after their encounter. Do they want revenge? Have they changed at all? Answering those questions can give you a complete character to work with, and even a whole story if you develop it enough.

So, think about your mooks. Do you want them to just be the nameless fodder? Cool. Do that. But if you want to do something a little different with them, try this method out and see if it works for you.