It is the Year of Eviltry.

Today, April 1, 2013, marks the second anniversary of the Evil League of Evil Writers. Most of our regular readers know that we here at the ELEW have occasional interviews and giveaways, but always do something special for our anniversary.

No, this is NOT an April Fools’ Day joke. The ELEW was officially founded on April 1, 2011.

For this year’s anniversary celebration, we have a very special interview and giveaway.

Our evil guest is Andrew Shaffer. 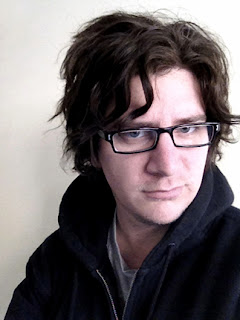 Come on. Evil is right there in his name.

We asked the wonderfully evil Andrew our standard set of interview questions. Below are his answers.

My zombie survival plan is to become a zombie. If I’m a zombie, I won’t have to worry about my cholesterol or watch what I eat. I think I’d make a good zombie.

2) You’ve given some brilliant advice to aspiring authors, and as this website is dedicated to keeping writers from being douchebags, I’d like to ask you what you feel would be the requisites for a successful writer’s group/beta reader/crit partner?

There are four kinds of beta readers/critique partners: Those who praise everything you write, those who correct your grammar and spelling, those who offer constructive advice and spark your creativity, and those who call you on your bullshit. Since you’re not likely to find all four characteristics in one person, it’s a good idea to have more than one beta reader/critique partner to cover your bases. Constructive criticism is great, but it’s nice to have someone who will massage your ego. These people are usually called “family.”

I bought a treadmill desk, which is one of the best investments I’ve made in my career. I don’t write at it every day, but I try! If you’re sitting down, it’s a good idea to stretch your legs every hour or two — it probably helps the mind as well. On the mental side, I would say: take care of yourself. We’ve seen too many martyrs. I recently wrote about this for The Huffington Post.

Ever since I learned to read, I wrote. I read books as a kid, and thought the natural response was to write your own books. One of the first things I ever wrote was Teenage Mutant Ninja Turtles fan fiction, published in my elementary school’s monthly newsletter. I also wrote and illustrated a parody of Pee-Wee’s Playhouse called “Pee-Wee Penguin’s Igloo” in the second grade.

5) Which character of yours speaks to you the loudest? This can be either the most insistent character or the one that just wants things their own way all the time. Answer can be the same for both!

Earl Grey in Fifty Shames of Earl Grey was the most fun character to write. He has unlimited amounts of money, so can do whatever he wants—including cloning dinosaurs and combining their DNA with kittens to make them extra cute. I just thought, what would I do if I had all the money in the world? Jurassic Fucking Park, that’s what.

6) When discussing our own evil idols, the name Andrew Shaffer popped up as one we universally agreed is a writer of the evillest kind. Who is the evillest writer you can think of, one whose evil you aspire to yourself?

Thank you for acknowledging my evilness. The evilest writer I know is Bret Easton Ellis, who was brilliant in Less Than Zero and American Psycho and now uses his considerable powers of prose to cause havoc in 140-character bites on Twitter (@breteastonellis). I profiled him in Literary Rogues, though unfortunately did not interview him. It’s probably best we hold our idols at arm’s length though, isn’t it?

In Fifty Shames of Earl Grey, I was pretty mercilous to E.L. James’ Fifty Shades of Grey. I’ve had some readers tell me they found my parody boring and tedious, to which I can only say: Thank you—I succeeded in mimicking James’ writing style!

8) You’ve had a bad day and head to YouTube to watch adorable animal videos. Kittens, puppies, pandas, or other: which do you pick first? This has absolutely zero effect on your evilness, of course, unless you pick human babies.

Clears throat, and says in the voice of The World’s Most Interesting Man: “I don’t watch adorable animal videos, but when I do, it’s teacup piggies.”

9) Have you ever shot a man in Reno just to watch him die?

I’ve never shot a man or woman. To do so, I would need to have fired a gun, which I haven’t really done. I touched a gun once at a police station, and that was quite enough for me.

10) We’re going to give a random commenter an Andrew Shaffer book of their choice. Pretending they’re an AS virgin, which would you recommend for them?

My books are like children: You can’t ask me to choose my favorite! My parody,Fifty Shames of Earl Grey, is my best-known and most humorous work, butLiterary Rogues: A Scandalous History of Wayward Authors might be closest to my heart because it was such a labor of love. Those are, uh, both my favorites? My first book, Great Philosophers Who Failed at Love, is also quite funny and melancholy, but she’s already moved out of the house and gone on to college so I forget about her. So, to wrap up and answer the question, I would recommendLiterary Rogues, because that’s the one I’m out pimping on tour right now. She’s the one whose baby picture I’m showing off at the moment.


Thank you, Andrew, for taking the time to bestow your evil upon us and our readership!

Each year on the ELEW’s anniversary, our Evil Interviewee is canonized. Andrew Shaffer is now recognized among the Evil League of Evil Writers as ourPatron Saint of Snarkdom.

If you would like to declare your allegiance and swear fealty to our Patron Saint of Snarkdom, he can be found via the following: