You are here: Home / blog / Knowing When to Call It

As previously mentioned, I took April off to finish writing a book.

This book has more or less been in development since 2012, although the tent pole moments have been in my head since 2005 or so. It was supposed to be out in 2013 but I was procrastinating as my gut told me I didn’t want to remain tied to the publisher of the series. Then I lost/left my job and pulled my books anyway. In 2014, I got sick. In 2015, everyone died and for many months I just wanted to join them.

(It’s hard to write anything when your current status is OMWF Buffy.)

This book I had to write–Oblivion, which will unfortunately be the final Demons of Oblivion book–was a casualty of changing circumstances, debilitating depression, physical illness, and burnout. And given that I make a living writing other stuff, editing, and doing graphic design work that all involves sitting at the laptop all day, I genuinely felt like if I could set everything else aside for a month, with nothing else to focus on, I’d get Oblivion sorted at last. It’s a big book with a lot of moving parts, it needs a lot of attention.

I have gotten fuck all done on this book.

I started with about 28K and right off the bat had to cut 10K. Some of that I reused, other scenes will remain deleted. Then I’d get through 3K – 5K words and find I had to go back and cut something. Right now the Oblivion is sitting at 36K words (of 90-ishK) and the graveyard file is at 20K.

April opened with horrible mental health issues due to new medication side effects and my brother requiring brain surgery, followed by the anniversary of my dad’s death.  It fucked me up something fierce. I got nearly nothing done. I just wanted to lie in bed with my cats reading, or lie on the couch playing a new Skyrim character.

I felt like I needed to finish this book/series–for the handful of loyal readers who have been waiting three years and continue to support me, for me so I’m not launching a new series in September with this old one still plaguing me, for the characters who have lived with me for twelve years now and should have this part of their journey see a close. Because it’s a story I need to tell.

But as I lamented how I was getting nothing done, Bad Horse reminded me: I don’t have to finish.

Writers, sometimes the pressure of poor sales, piracy, reader demands, negative reviews, publisher bullshit, all come together to thrust open that door you need to keep shut while writing a zero draft, and all that shit seeps into the room. It makes writing something a chore instead of the joy it should be. It makes the book feel exposed before it’s ready to be and that can shut the whole process down.

I’m here to tell you today, on this fifth anniversary of the ELEW where we celebrate the badassery and eviltry of writing…that sometimes you have to call it.

Not just books or series, but with everything. Nothing lasts forever. Many of your stories will go unfinished. You won’t complete every series you start no matter how experienced a writer you are.

In publishing, your editor will leave/get another job. Your publisher(s) may close. The series you love won’t do well and you’ll have to cancel it. You and writer friends will part ways, not always on great terms.

Again, this month marks the fifth year the Evil League of Evil Writers has been operating and up to no good. Will we make it five more? No one knows. Volunteer-based groups and labors of love always struggle, because they reach a point where love isn’t enough.

A thing isn’t beautiful because it lasts, though.

The only constant in anything, especially publishing, is that there is no constant. Everything will keep changing. And that’s okay. It’s okay to let go if you’re only doing something or staying somewhere because you feel a sense of obligation. Organizations change and disband, books don’t always want to be written There’s a difference between enduring and slogging through something currently not fun but that you love, and finding absolutely no intrinsic value in what you’re doing. Creative work born out of obligation will never be your best work; if you can’t find a reason to love what you’re doing, you can set it aside and move on.

You will disappoint people–that’s inevitable. If it’s a book or series, you might get actual hatemail and threats. You will miss and mourn people you don’t see anymore if you leave a publisher or group. But that’s natural and normal.

You have permission to say goodbye to things that are strictly obligatory and move on. Keep changing. 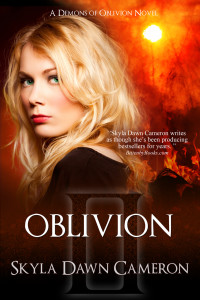 I can’t tell you how to know when it’s time to call it, honestly. I haven’t reached that point with Oblivion yet. I am too fucking stubborn to give up yet, and if I have to fight it the rest of the month, I will.

But I think it comes down to this: if this obligation you feel–in this moment–to whatever it is you need to write or do were to come to an end on April 30, would you feel relief or regret primarily? Would you be glad you never had to finish it, or would you regret what you didn’t get to say or do?

For me, I know that I will regret not finishing this novel, and that I won’t always have another opportunity to finish it.

And so I write.